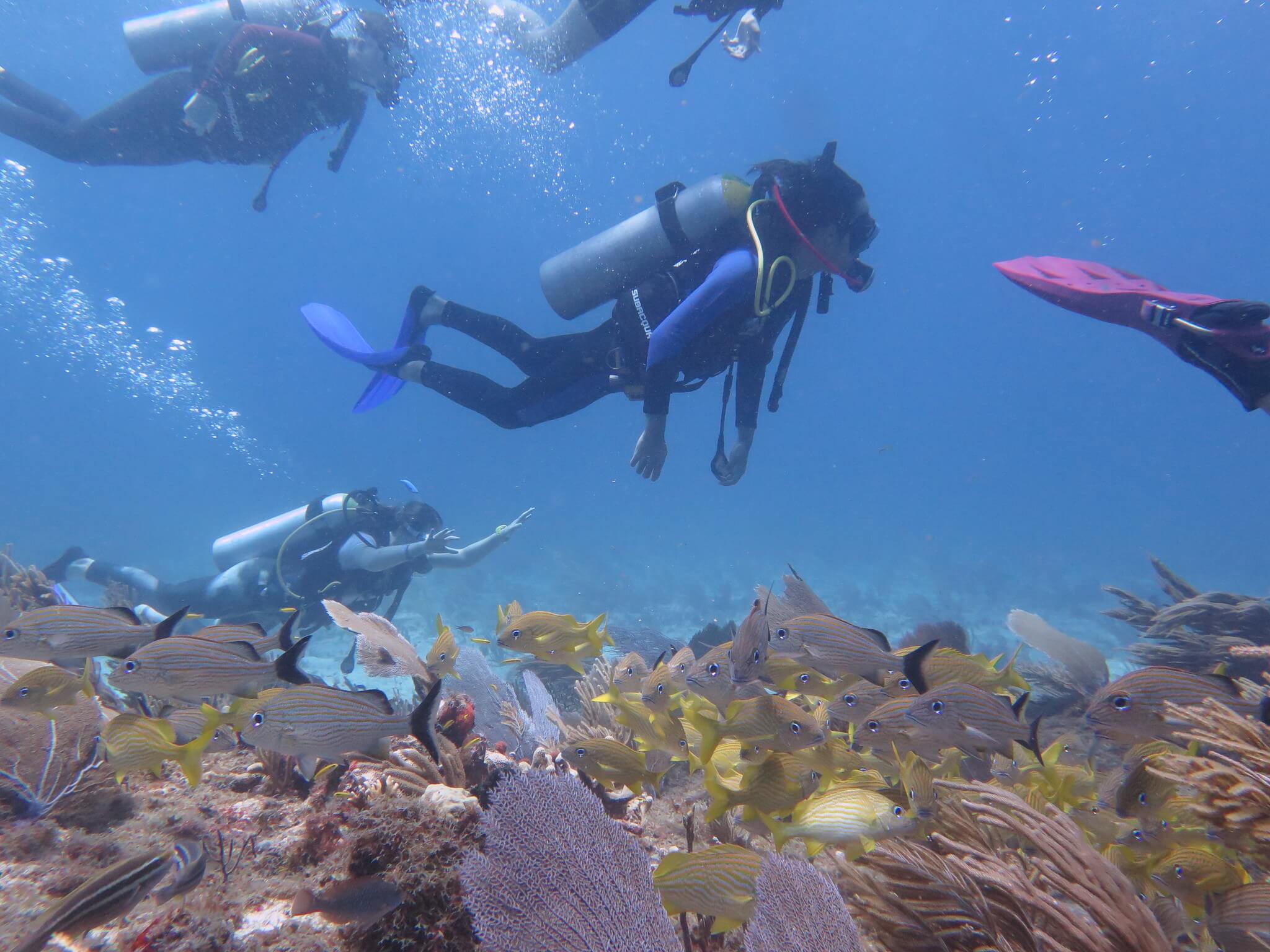 Coral reefs provide protection for coastlines and are a feeding and breeding ground for many species. Reefs are also a source of income for many economies. Despite their importance,  the health of coral reef systems around the world is in decline. This is due to a range of factors including ocean warming, contamination, and pollution. Our projects in partnership with the National Marine Park of Puerto Morelos seek to support coral reefs through monitoring, restoring, and removing debris.

The Mesoamerican Coral Reef System is the second largest in the world.  You may have heard of it as the Great Mayan Reef.  It spreads over 1000km.   Part of the reef is in the National Marine Park  Puerto Morelos.  This is where our project is focused.

In 2019, 45%  of the coral colonies in the National Marine Park of Puerto Morelos were dead or dying.  Loss of coral species, coral coverage, and biodiversity are factors in this loss. An increase in biological contamination also contributed.  We work with our in-country partner on coral restoration through cloning and assisted fertilization.

In 2019, our team collaborated in the generation, maintenance, and transplanting of 24,396 coral heads.  These were relocated to 20 different sites.   We also supported our partners with 2, 175 work hours in the coral laboratory.

Coral Watch is based at The University of Queensland, in Australia.  It is a citizen science program that has been operating since 2002. The aim is to increase understanding of coral reefs, coral bleaching, and climate change across the world.

Data from the National Marine Park  Puerto Morelos is vital. It ensures there is a wide picture of what is happening with coral reefs around the world.  In 2019 we conducted 58 coral watch surveys on the coral reef ecosystem to add to the data collection efforts.

Plastic and other debris in and around the reef is a major concern.  It affects the entire reef ecosystem.  A study cited by evolutionary biologist, Karl Gruber stated that Coral reefs from places contaminated with plastic had an 89% chance of developing a disease. The main problem is that plastics attract microbes. In plastic-free regions, these odds were just 4%.

Our project tackles the issue by promoting recycling and plastic-free lifestyles. Beach cleans and dive cleans are also part of the approach. Our beach cleans in 2019 resulted in 606kg of rubbish being collected.  We sorted 115.8kg of recyclable materials from this debris. We will continue this clearing effort as part of our project work.

The National Marine Park Puerto Morelos hosts a crucial section of the Mesoamerican Coral Reef System. This reef, as well as others around the world, are suffering challenges such as bleaching and contamination.  Our project plays a vital role in monitoring and restoring reefs as well as removing debris. Our aim can be summed up by oceanographer Sylvia Browne,  “We need to respect the oceans and take care of them as if our lives depended on it.  Because they do.”